I’m visiting my friend Luke in Los Angeles. It’s my first time visiting this city. It’s actually the last great American city I have never visited; I saw everything else in the top ten a long time ago, but my family avoided visiting this place, and I kept that avoidance myself for many years.

The drive down from Mountain View is something I’ve heard people complain about. They say I-5 is boring and flat and empty, and 101 takes forever. I chose 101, and it was a long but completely bearable six hours. I don’t understand the fuss; it’s absolutely beautiful, mountains and rolling grassy hills and curves and glimpses of the ocean the whole way down. A lot like 280. I don’t think it was much longer than I-5 would have been, and so can’t understand why people on a casual trip would ever choose it.

LA traffic is not exaggerated! On a lazy saturday afternoon it’s thick in places even many miles outside the city center. The roads are wide; it’s almost purely an issue of the sheer number of cars. I have to remind myself that I’m driving into another New York, not another Austin or Seattle.

Crossing over the last mountain to see the Hollywood sign and downtown buildings leaves me utterly, stupidly gleeful, like Kenneth the Page from 30 Rock. Hollywood isn’t something I particularly care about, and LA wasn’t even on my travel list for much of my life, but the recognition value is high, and makes me feel like I’m seeing something rul durn big. There’s a tan orange lady driving a mercedes, and a baller white kid driving a Z3, bored girlfriend staring out the passenger window, so bored. I just can’t stop grinning.

Turning off the highway and into neighborhoods, I find sunny streets, mildly run down, old homes and three story apartment buildings, a nice grid of primary streets with cheap shops. It’s San Antonio, basically, but endless. I’m enjoying it, and at some point I realize: I’ve never had a place so exactly meet my visual expectations. It takes me a while to realize the reason: I’ve been seeing this place on video for my whole life.

Koreatown, where my friend Luke lives, is humongous. It’s something like three square miles (ten by thirty blocks) with a population in the low hundreds of thousands, plurality korean. Even though it’s a weekend, there aren’t very many middle aged people. Everyone is very old and very wrinkled, or very young and very stylish. I think the middle aged people have moved out to the suburbs. There are literally a dozen or more skyscrapers in Koreatown alone, four or more with giant logos of Korean banks. This is just one part of LA. This place is huge.

The food is amazing. We have the best Korean barbecue I can remember having (as good as or better than Vancouver), a few blocks from Luke’s apartment, and it’s all you can eat (we don’t eat too much), and for $10 each. Koreatown is a walking place, which is a big part of why Luke picked it. In a day and a half, we will walk for barbecue, ramen (best ramen I can remember having, first time I’ve had Oyakodon), coffee, and two walks just for fun.

We also walk around UCLA. It’s a pretty campus, sunny like UT, hilly and full of brick buildings like UW. The area surrounding is really wealthy, and the UCLA students seem pretty fashionable and too flashy. The medical facilities are endless; this must be such a good medical school. We pass one medical building named after David Geffen, and another after Ronald Reagan. I can’t imagine worse people to have medical buildings named after them, but it reminds me that every named building is likely named after someone ridiculous, someone officious. Architecturally I haven’t liked a campus this much in a long time.

We have a long (all day) conversation that drifts through programming, catholic guilt, old workplace gossip, new workplace comparisons, marriage, being thirty, cultural differences of a lot of different types, critiques of the new city (since Luke has only just moved here), dangers and obligations of people who gain the power to move the lever of the world, and other things I can’t remember. It’s been a long time since I’ve seen Luke, and I’ve missed him. It’s great to talk non-stop for twelve hours.

The next day we wake up late and go to Santa Monica so I can see the beach. There are almost no asian people. In their stead: gym clothes wearing white people. Well over 90% gym clothes whites. With creepy tans.

The beach is great, and for a while we talk about the fear of open water and staring into the great underwater abyss, but it’s cloudy, and blood sugar is low, so we don’t stay long. On the way to find food, we stop at a touristy british pub/shop, because I suspect they will have Revels. They do! I buy a bunch, and impulsively lie to the shop owner that I grew up in Britain and deeply deeply miss Revels. I’m ready to explain that my dad was a UCL professor when I was little, but he doesn’t ask about that; instead says Galaxy Bars are his favorite, and we talk a bit about chocolate. Luke asks the other proprietor where british people in LA gather, and she says “Here, of course”, and without thinking he replies, “Isn’t it a little touristy?”.

We go back to the car and wander aimlessly for a while, thinking about where we might eat. The wandering is a good way to see the size of Los Angeles, the way one neighborhood rather suddenly borders another. In this wandering way, over the day and a half I will get to see: Thai town, Downtown, Hollywood proper (I accidentally and aimlessly drive us by the walk of fame and the chinese theater and the wax museum without realizing it), and Skid Row (that one’s on purpose). 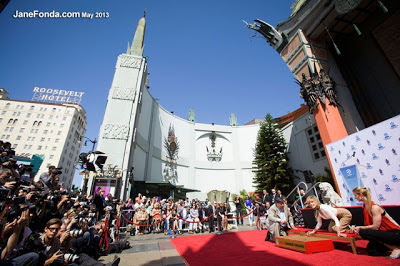 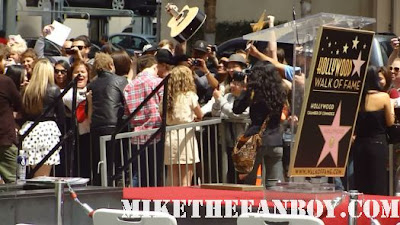 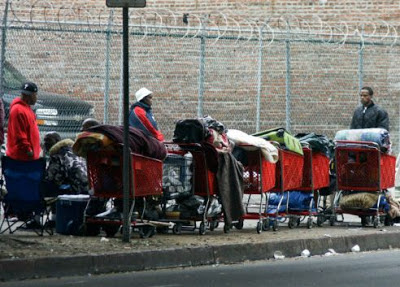 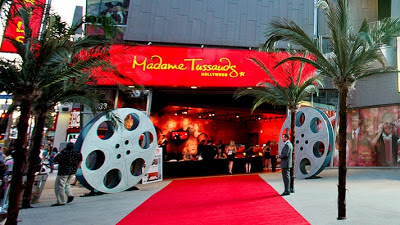 After lunch (decent Thai food in a truly and hilariously skeevy neighborhood with aimless tough men standing outside cheap shops that nevertheless offer valet parking) and some more wandering and good conversation, it’s time for me to head back home. The drive back is as good as the drive down.

Thanks, Luke! Looking forward to coming back 😀