There are three games I’ve been playing lately:

Monaco is a multiplayer heist game in the faux 1900 style of Agatha Christie or Dudley Do-Right. Players take the roles of crime specialists (the Lookout, the Pickpocket, the Cleaner, etc) to help the mysterious Gentleman escape the city of Monaco, doing ample crime along the way.

The game is set top-down in an adorable but somewhat cluttered 8-bit style. Controls are dead simple, levels are relatively well laid out, and on the surface, the game promises to be one of careful sneaking and planning. In reality, it’s a zany dash as players scramble in chaos to make up for each others’ mistakes. The game more or less perfectly resembles a screwball comedy movie. I laughed more playing this than I did playing Portal 2.

The character classes offer genuinely different strategies. For instance, the Mole can tunnel through most parts of a level, while the Cleaner puts guards to sleep with chloroform. The Locksmith opens locks much more quickly than other players, and the Lookout can see all the guards on the board.

Where Monaco falls down is in communicating information and objectives to the players. The boards are dense and overfilled with glyphs. It’s not clear where players should be going, or what things need to be done. There are arrows everywhere pointing the way, but they just distract from the other glyphs and vice versa. I feel like the game would almost benefit from a collaborative planning phase, or at least some more in-game direction.

Ultimately, I would highly recommend this, but specifically as a party game.

Naught is an iPhone platform game, and surprisingly, it doesn’t suck. The game is relatively unusual for having you rotate the whole world; the protagonist just follows along. 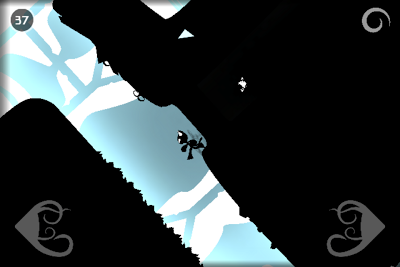 There are several different control styles: tilting the phone, pressing left and right rotators (I favor this style), and swiping left and right. All seem pretty smooth, and not just in the “smooth for an iPhone game” way of other platform games.

Naught is beautiful, albeit a little rough around the edges, with a harsh and creepy black and white style, and (other than the main character) smooth, flowing line work. 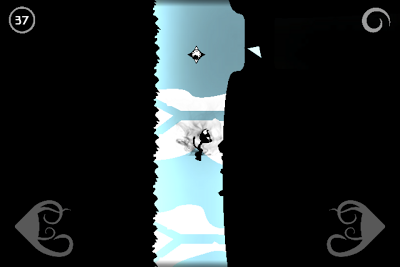 The puzzles and obstacles are pretty thoughtful, and the game requires a lot of the same kind of mind bending as your favorite real life metal puzzles, with an added world spinning disorientation. Imagine if you were doing a metal ring puzzle while riding a creepy black and white roller coaster, only you didn’t need to throw up. That’s Naught.

The music is an almost intolerably bad collection of canned drum solos and weak techno. I turned it off and I’m not turning it back on.

I’m told the game has a good story, but I haven’t bothered yet. The levels are too interesting. 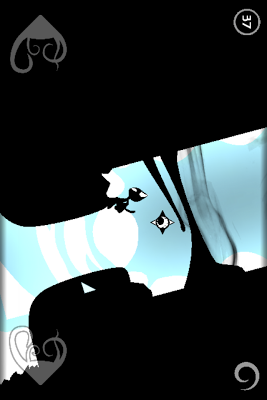 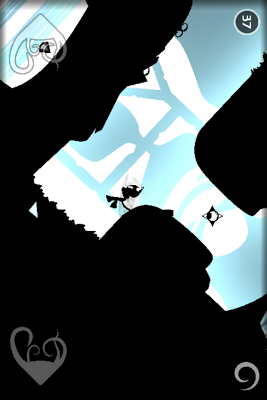 Naught is a little too rough around the edges, but I’d still recommend it. Better if you can try someone else’s copy first.

Basically, Awesomenauts is multiplayer Megaman. It’s Smash Bros with guns. It’s… a playable saturday morning cartoon. If you’re looking for a shiny multiplayer game with a lot of staying power, this is the one to get.

There’s almost no story to Awesomenauts (and indeed, no single player mode). Two robot armies battle across the galaxy for lucrative resource drilling rights, and a team of elite mercenaries, the Awesomenauts, are free for hire anywhere, on either side. 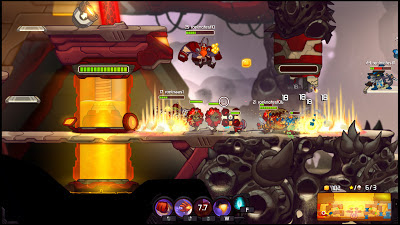 The game is a really well tuned platform game with cute cartoon weapons and a lot of interesting and useful special powers. All games are 3 on 3, with players able to play on the same team, opposing teams, single or multi player (bots play the rest), local or split screen or online or whatever.

Both sides field an endlessly regenerating army of droids, and both sides have strategically placed turrets which are very hard to kill. The game shifts smoothly back and forth between player vs player skirmishes, tower defense and tower pushing, and killing cheap droids for money. Money provides for a satisfying amount of strategy; you gather money while fighting and use it to buy upgrades, typically on the order of five or ten in a game. Choice of upgrades is very context dependent and can significantly impact the game outcome. 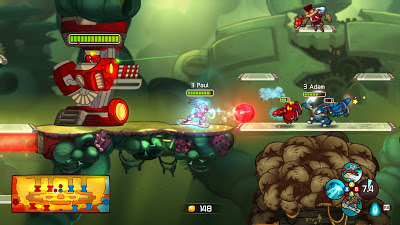 The game has a crap-ton of different (really actually different) characters with cute stock attitudes, enough to suit many different playing styles. I favor Lone Star, the bull wrangler who hovers around the edge of skirmishes doing ranged damage with thrown sticks of dynamite and holo-bulls. My friend Vianney favors Skølldir, a heavy robot Viking with earthquake and throwing powers. Many players have abilities for physically adjusting other characters; there’s pushing, pulling, slowing, stopping, throwing. For a video game, it feels very physical.

Did I mention that the game is super cartoony? I have a high tolerance for cartoons, and occasionally it’s even a little too shiny for me. The rest of the time, I’m extremely happy with the graphics.

Gameplay in a group tends to feel like a nice halfway point between a 3 on 3 basketball game (with intensity and strategy) and Smash Bros (with chaos and happy shouting).

There’s a bit of a learning curve (the tutorial helps this enormously), there aren’t enough levels (yet), and you don’t have most of the upgrades until you’ve played enough to unlock them, but this game is otherwise flawless. I would recommend it highly to anyone and everyone, at least to try.