How big is big? Many of my friends in technology like to talk about big scale. Programmers at big companies work on big projects which have billions of transactions a day, on tens of thousands of computers. We talk about these things like they’re really big. They’re really big, aren’t they?

I wanted to try to gain a better intuition about big, and maybe to bust my pride a little bit, so I asked myself:

Which is bigger? A mountain, or all the Google searches ever, if each search was worth one bean?

Well, a Google search is a little thing, but not insignificant. A lot of beans (or a lot of Google searches) should really add up.

So I wanted to know: if we’d been throwing a bean on a pile each time someone made a Google search, would we have a pile that was comparable in size to a mountain?

Here’s a page with some of Google’s yearly search totals. Google had something like 1.7 trillion searches in all of 2011. I think 12 trillion is a safe estimate for all the Google searches ever. It’s almost certainly within a factor of two (ie, somewhere between 6 and 24 trillion).

It might even be the case that Mount Fuji is larger in volume than all the beans the human species has ever eaten in all history. I don’t know. 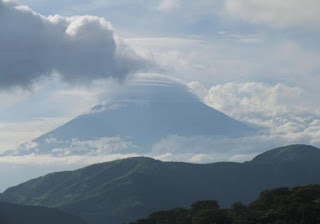